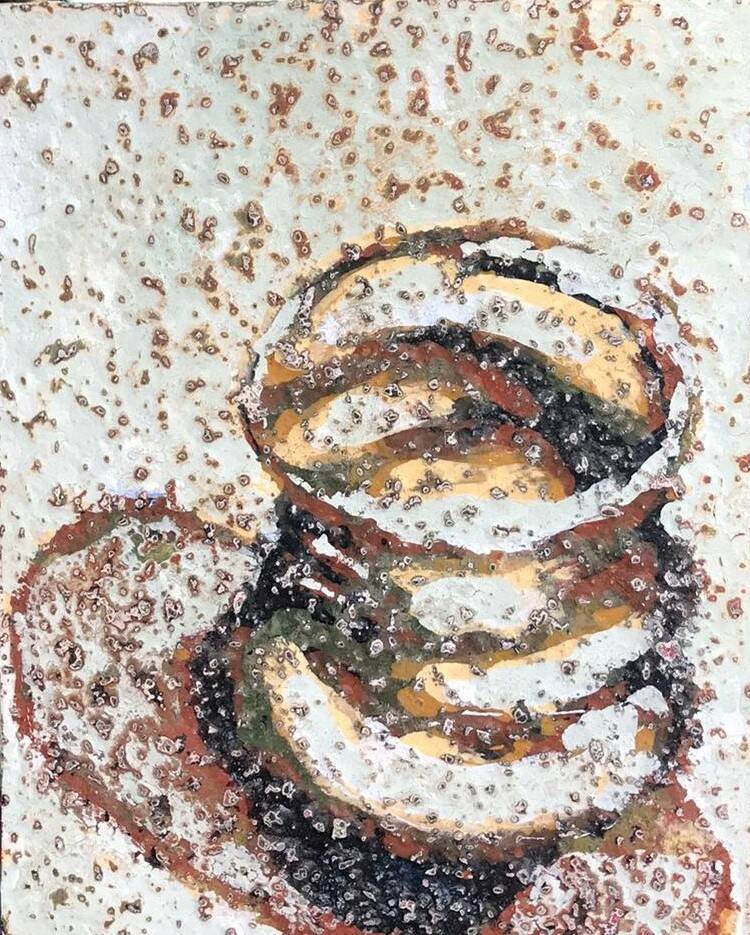 Kartel Kopje (Klein) 2020 is new acrylic on canvas painting by contemporary South African artist Adéle du Plessis. During March and April 2020, Adéle sketched and walked every day with her daughter artist Nicole Sciarone in Delft. From this drawing exercise, Adéle painted a series of paintings. She plays with Plato's philosophy about Art and Mimesis. Plato didn't like art. He argued that it does not belong to an intellectual society. Art was too far removed from reality to be of any value. Adéle has played with this century old argument in her sketches her paintings of those sketches. Too read more about Plato's argument about art and how Adéle plays with his rules about art, read the exhibition: Drawn at Home.

"Kartel Kopje" is Afrikaans and Dutch for a cup with grooves in it. In Kartel Kopje (Groot) you can read more about the meaning and associations of the title of the painting.

Adéle has been using used coffee grounds and white paint to create a thickly textured layer under many of her paintings. Recently she has been painting layers, and layers of colours on the background. She paints the final painting like in Kartel Kopje (Klein) or paints it with a layer of silver. She then takes a sand grinder and sands her painting down. Which results in revealing the layers of paint and coffee underneath the final painting. In the 1940s an art movement grew that when we look at a painting we see the final subject. We are unaware of the materiality of the painting. The back of the painting, the layers underneath. Attracting the awareness of the space art takes and can take is called Spatialism. Most people will know Spatialism from the slashed canvases of Lucio Fontana. Who is also the creator of this movement.

Spatialism grew from Futurism, where movement and space are also important to incorporate into your art. Paintings had to be more than just two dimensional and attract attention to more than just realistic painting. Art has always been more than just copying nature, it has been about adding and showing more than we normally see in our everyday world. Futurism was about movement, aggression, speed, energy, powerful lines, progress and new technology. Adéle had fallen in love with Umberto Boccioni's Forme uniche della continuità nello spazio, 1913 (cast in 1972) or "Unique forms of continuity in space" at the Kruller-Muller Museum in The Netherlands. But Futurism is a very aggressive art movement. You need to really dig into the movement of showing four dimensionalities in your three dimensional or two-dimensional artwork. Their successor Spatialism leaves more room to combine Adéle's painting style that is more reminiscent of French Impressionists.