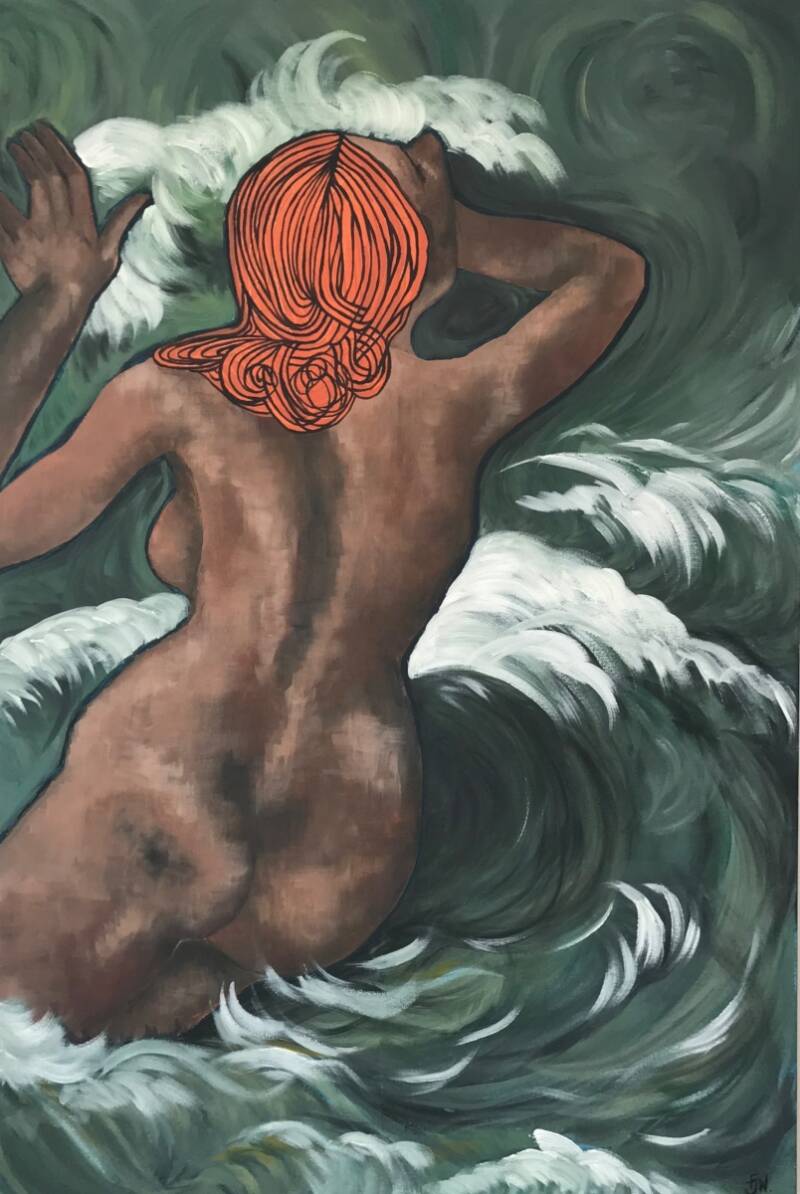 In a time of great uncertainty, it might feel like we are swirling about in a big pool of water, trying to stay afloat to swim towards safer and dry shores. The greyish, green and blue hues of the seas with touches of white, show the forces of nature at work in its most unpredictable form. It feels like a dream one might have where you are swimming across the currents reaching for something that gives meaning to your life– a sort of awakening to your worldly reality.

A naked, black woman with a shock of orange hair– a stark contrast and at odds with the melancholic mood of the water, is keeping her head and body above the crashing waves. A feat in itself as she remains afloat despite the temperamental nature of the water. It looks as if she’s staying afloat on a surfboard, weaving through like an expert, competitive surfer. Her strong, lithe body remains unaffected with the situation going on around her, looking ahead into the distance in a calm manner. It seems like she has found the safety of a shore just further ahead.

A little more distance to swim and it will all be over. A metaphor to life. We may not be best prepared for unforeseen moments that occur and might not make sense of what’s going on, swimming hard against the waves and struggling to stay afloat, but we will eventually make it to the other side. We won’t be lost at sea forever, our problems are only temporary. A passing through in order for us to reach our destiny.

Fiona explicitly painted “Riding The Waves’  (2019) as a counterbalance to the many female nudes in Art History. She is actively engaged in the visual presentation of the black body in classical movement. The large majority of well-known white female nudes in the classical art canon are misogynistic at their core. Female nudes that are painted by male and for the gaze. Fiona paints the female nude with a female gaze. Her female nudes participate in everyday activities, such as swimming. They are not women without any agency but free in their bodies. The waves might suggest freedom in a tumultuous or violent world, but inherently actively struggling and partaking in this world nonetheless.